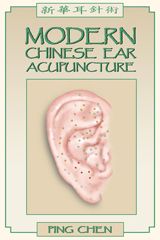 This is an attractive and detailed full-color depiction of the anatomical areas, zones, and points on the external anterior and posterior surface of the ear. Each is identified with an English name and the international standard nomenclature for point reference, Pinyin, and chinese characters, and each is color-coded according to its location. Explanatory notes and enlarged detail images provide further utility. the standard names, locations, and indications for roughly 80 ear points are provided.

This text is a translation and edited version of an original manuscript. Dr Chen has tried to choose only those details that are relevant to the Western acupuncturist although there are some procedures that may not be easily accessible to the average practitioner. On the whole however, the information is presented in a clear, understandable and practical fashion.

The book is divided into two main sections. The first four chapters are devoted to the theory and practice of ear acupuncture, while the final chapter, comprising more than half the book, introduces the treatment of more than 132 different conditions together with many case histories. For the practitioner who is unfamiliar with ear acupuncture, a key at the beginning, clarifying abbreviations such as SF (scaphoid fossa), AT (antitragus), SC (superior concha) would have been useful, as would an explanation of the meaning of MA that precedes most of the points, possibly modern acupuncture?

The first section includes a description of ear point selection and prescription formation, giving a clear explanation of how the practitioner might arrive at an optimum choice of points to address a particular condition. Along with specific points we are also presented with areas in which to search for the points. This is particularly useful as it acknowledges the geographical differences found, not just in the ears of different patients, but between the left and right ears of individual patients. This is an eminently sensible way to address ear point location as it encourages the practitioner to search an area rather than attempting to pinpoint a dot shown on a chart. This is followed by a description of the visual observation and inspection of the ear, including palpation methods which would have been improved by a more detailed description of possible findings such as "cords" and "patch-like projections". The last part of the theory and practice covers therapeutic methods which, as well as needling, includes blood letting, medicine injection, magnet therapy, medicated plasters and a section on commonly used seeds for acupressure. This is the part that could prove less easy to put into practice as some of the procedures, including medicine injection, medicated plasters and a number of the seeds recommended for specific treatment effects, could be difficult to obtain or inaccessible to many practitioners.

The final chapter on the treatment of common disorders would be improved by an introductory index of the conditions covered. That said, they are well presented with interesting and clear recommendations together with a number of case histories. There are a few unusual conditions here, and the reader’s imagination will be especially captured by the last treatment to promote longevity and slow aging.

Modern Chinese Ear Acupuncture is not a comprehensive text, but for the practitioner interested in ear acupuncture it is an extremely useful addition to their reference books on the subject. The illustrations are clear and the suggested treatments are refreshing and inspirational. I would certainly recommend this book.