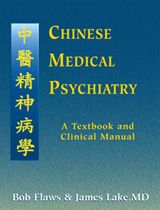 This book discusses the disease causes and mechanisms, pattern discrimination, treatment principles, and Chinese medical treatmnet of more than 20 traditional Chinese psychiatric diseases as well as the same information on 12 modern Western psychiatric disorders.
Each chapter delaing with either a traditional or modern disease category also includes extensive information on the Westerm medical nosology, etiology, differential diagnosis, pathophysiology, epidemiology, treatment, side effects, and criteria for referral written by a Western psychiatrist. There are also abstracts of recent Chinese and Western research as well as multiple case histories.

Psycho-emotional disorders form a substantial part of modern TCM clinical practice in the west and have always exerted a particular fascination for western practitioners. Indeed some modern schools of acupuncture have predicated a large part of their theoretical and diagnostic work on psycho-emotional considerations. Nevertheless, this is one area of Chinese medicine that has suffered from a lack of substantial textbooks. Chinese Medical Psychiatryis a significant and major contribution to the field and will for many practitioners become their primary text for study and reference. The book is co-written by Bob Flaws, author of numerous books on Chinese medicine, and James Lake, a US Board Certified Psychiatrist. It is a fine example of the integration of these two great medical traditions. For practitioners of Chinese medicine, the material on western psychiatric theory, diagnostics and treatment which are interwoven throughout the text, will be of immense value. For western medicine psychiatrists and psychotherapists, this book will provide an insight into the sophistication of understanding and wide application of Chinese medicine as well as its long and impressive historical tradition.

The book is divided into three parts. Part One covers introductory theory and fundamentals, with an emphasis on Chinese medicine including basic theories, aetiological factors, materia medica of commonly used substances and formulas, major acupuncture points with their indications, acupuncture formulas, discussion of basic listening and communicating skills and valuable suggestions on the integration of Chinese and western medicine treatments. There is fascinating material on historical discussions of psychiatric disorders. For example Difficulty' 59 of the Nan Jing (The Classic of Difficulties, Han dynasty, 206 BCE to 200 CE), in a discussion of how to differentiate mania (kuang) and withdrawal (dian), says:

At the beginning emission [or outbreak] of mania, there is little lying down and no hunger. One [speaks of] oneself [as if] elevated and worthy [of honor]. One discriminates [or points out] one's [special] intelligence and one behaves in an arrogant and haughty way. One frenetically smiles, sings and is happy without break. During the initial outbreak of withdrawal, the mind is not happy. One lies stiffly, staring straight [ahead] '

Part Two is devoted to the discussion, aetiology, differentiation and treatment by herbal formulas (with modifications) and acupuncture of 21 Chinese classified disorders. These include basic and commonly encountered ones like irritability, anxiety, agitation, impaired memory and insomnia, as well as very specific Chinese medicine categories such as running piglet and lily (bai he) disease. Special features include abstracts of Chinese medicine (herbal and acupuncture) articles on treatments of the disorder discussed, and representative case histories ' mostly drawn from Chinese sources.

Part Three approaches psychiatric disorders from a western medicine diagnostic perspective, although the treatments discussed are of course by Chinese medicine. The contents of this section include senile dementia, schizophrenia, depression, obsessive-compulsive disorder, premenstrual and perimenopausal problems and, interestingly, psychological disturbances due to erroneous qigong practice. There is inevitably some overlap with part two of the book here, especially with the discussion of 'withdrawal and mania' in part two, and bipolar affective disorder in part three, which may lead to some confusion. Glossaries and appendices include western psychiatric terms and common side effects of western psychiatric medicines.

I have only minor quibbles about this admirable book. In some sections (for example the materia medica) the layout of headings and sub-headings could be improved to facilitate rapid reference and it would have been good to see more case histories from western practice.

There is an excellent companion website to this book (at http://www.chinesemedicalpsychiatry.com/), which in addition to material offered in the book, includes 23 full articles and some valuable web links.

Finally I would like to include a quotation from the book which will resonate with any practitioner of Chinese medicine. It comes from Yu Chen's preface to his Qing dynasty collection of case histories (Gu Qin Yi An An):

From antiquity to the present, there have been more books on medicine than one can keep track of. For each medical disorder, a special [disease] category has been established, and for each [disease] category, there are numerous [treatment] methods. In the final reckoning, although the number of [treatment] methods may be limited, there is no limit [to the variety of] disorders. Even the variations of a single disease are limitless, and, if several diseases converge on the body of a single patient, the variations are all the more endless ... Therefore, it would seem that preoccupation with [individual treatment] methods can take one no further than the carpenter's or wheelwright's square or compass. Medical disorders do not manifest according to square and compass. If the doctor simply tries to treat them according to square and compass, the cases that fit the rule will survive, and those that vary from it will die m... What is crucial is the ingenuity of the one using the [treatment] methods.

Bob Flaws and James Lake have produced a masterpiece. While maintaining integrity to the paradigm of TCM, the authors provide an abundance of clinically relevant Western medical information on the diagnosis and treatment of mental-emotional disease. Of even greater importance is their presentation of pattern discriminations, treatment principles, and treatment protocols for Western psychiatric disorders. This text represents a landmark contribution to the professional literature of TCM. - Steve Erickson,Lic. Ac., Dipl. Ac. Assistant Professor, Northwestern Health Sciences University

Chinese Medical Psychiatry is an excellent addition to the textbook sources on the treatment of diseases ~ with traditional Chinese medicine. This book advances the high standards that Blue Poppy Press has established over the last decade for publication of top quality clinically oriented books on TCM. The book's authors, Bob Flaws and James Lake, have made a significant contribution in writing this hne work on an area of Chinese medicine that, heretofore, has received too little attention. Chinese Medical Psychiatryestablishes a new high standard for clinical texts on the often challenging and vitally important speciality of psychiatry from the perspective of Chinese medicine. I welcome the publication of this book and look forward to utilizing it in my clinical practice. - Charles May, M.D., D.O.M., Dipl. Ac. & C.H. Diplomate, American Boards of Family Practice & Emergency Medicine, Instructor & former Board Member, American Academy of Medical Acupuncture

Psychiatric diseases are among the most commonly encountered illnesses in the American practice of Chinese medicine. Finally, there is a book that comprehensively details the Chinese medical treatment of psychiatric illnesses. Thoroughly researched in the Chinese medical literature, based on Bob Flaws's many years of clinical experience, augmented by research references and case histories, and enhanced by psychiatrist James Lake's succinct and practical Western medical information, this book sets new standards in the understanding and treatment of psychiatric diseases with Chinese medicine. - Simon Becker, Dipl. Ac. & C.H. Author of A Handbook of Chinese Hematology

It is refreshing to see authors courageous enough to take on this subject. The treatment of mental illness by TCM is a topic long overdue for discussion. It is also a topic historically much avoided by TCM schools and practitioners. This is a gem of a book! It is all here - from frequent joy and lily disease to schizophrenia and bipolar disorder. The chapter on depression and the abundance of abstracts and case histories accompanying each disorder are reasons enough to have this book in your library. - Lynn Kuchinski, M.I.M., Lic. Ac., Dipl. Ac. & C.H., Author of Controlling Diabetes Naturally with Chinese Medicine

Finally! This invaluable comprehensive resource on the TCM treatment of mentalemotional conditions has been needed in our libraries for too long. This book is sure to help bridge the gap between Western psychiatry and Chinese medicine and become an essential contribution to the treatment of these difficult conditions. A must for any practitioner of Chinese medicine interested in understanding the TCM treatment of psychiatric disorders as well as for every Western psychiatrist eager to gain insight into Chinese medicine. - Rosa Schnyer,L. Ac. Research specialist, University of Arizona Department of Psychology, Author of Curing Depression Naturally with Chinese Medicine

Chinese Medical Psychiatry fills a nagging void in the English language literature on both the treatment of mental disorders and the nature of the psyche in TCM. Despite the popularity of these subjects within our field, there has been a dearth of rigorously translated information on this topic. This has led to many uninformed attempts to draw parallels between Westem psychoanalytic models and TCM theories which have no basis in actual Chinese texts. Bob Flaws and James Lake cut through to the crux of this issue when they explain the evolution of and confusion surrounding the different historical usages of the same terms by shamans, religious philosophers, and naturalistic physicians. In addition, this book, like all Blue Poppy clinical manuals, exhaustively covers diagnosis, pattem differentiation, selection of treatment principles, and formulas and their modifications. However, unlike most other currently available TCM textbooks, it goes a step further by also including research abstracts and case studies. Finally, we have a foundation upon which scholarly discussion of this subject can proceed. This book will form the basis for an entire generation of books on TCM psychiatry. - Todd Luger, B.S., M.Ac.O.M. Director of the Chinese Herb Academy

This is a book in which Chinese and Western medicine find common ground. It is a major step in that process. Recent Western research in the fields of child development, neurology, and personality are fostering a much clearer understanding of the neuorological and physiological aspects of mental and emotional pathology. With these developments, the level of clarity and specifi"city" of Chinese medicine is slowly being matched by Western theories, thereby making a general theory possible. This fine collaboration is surely one of the books that will pave the way. - Ron Kurtz Founder of the Hakomi School of Body-centered Psychotherapy, Author of The Body Reveals (with Hector Prestera, MD)

Finally, a true textbook explaining the relationships of mind/body medicine in Chinese medical terms that is practical and useful for both the serious practitioner and student. - Stuart Watts, L.Ac., D.O.M., N.D., President of the Academy of Oriental Medicine at Austin (AOMA), President of the American Association for Teachers of Oriental Medicine (AATOM), Board Member of the American Oriental Bodywork Therapy Association (AOBTA)

The authors of Chinese Medical Psychiatryhave produced a seminal text for both students and practitioners of Chinese medicine who desire to treat mental-emotional disorders. Finally we have a truly holistic clinical manual that encompasses both Chinese medical pattem differentiation and contemporary Western psychiatric theory and practice. This work definitely advances our understanding of how to address the nonduality of psyche and soma. - Liz Bernstein,D.C., Lic. Ac.

Chinese Medical Psychiatry is a very practical book. I particularly liked the integration of Chinese and Westem medicines and the tone with which these elements were presented. Although the treatment of mentalemotional disordes has received considerable attention from Westem practitioners, Chinese Medical Psychiatryprobably contains well more than the sum of everything else on this matter currently in print. - Bob Felt Coauthor of Understanding Acupuncture, Editor of Redwing Reviews