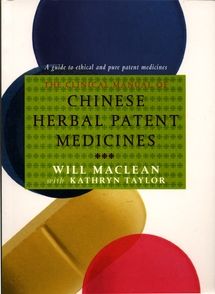 Description
The extensively revised second edition (August 2003) of the Clinical Manual of Chinese Herbal Medicines describes the actions, indications, dosages and potential combinations of over 330 medicines. Since the first edition, published in 2000, the number of medicines available in the marketplace has expanded considerably. New companies have entered the market, and some previously available medicines have disappeared. Patent medicines are, for many practitioners, the cornerstone of herbal medicine practice. The author believes that patent medicines, carefully and correctly applied, can be as effective as raw herb decoctions for many common conditions. In addition they have numerous advantages, not the least of which are improved compliance, relatively low cost to the patient, and a high degree of quality control.

JCM Review
Patent medicines have had a bad press in recent years. Hardly a month goes by without some kind of warning issued about contaminated patents, usually by heavy metals, or more recently the presence of aristolochic acid. Yet in themselves patent medicines can be an invaluable aid in the clinic. They are relatively cheap, easy to take, facilitate the prescribing of substances with intimidating tastes, are ideally suited to long-term tonification and have a venerable history, indeed some famous formulae such as Liu Wei Di Huang Wan and Gui Zhi Fu Ling Wan were originally produced in patent form. What has been needed for a long time is a guide to patent medicines that – in addition to being detailed in terms of application, patterns treated, contraindications etc. – emphasises the need for quality control in production. This is that very guide. Good Manufacturing Practice (GMP) is an internationally agreed upon set of principles and procedures that helps ensure the quality of medicines. Its basic concept is that quality must be built into each stage of the manufacturing process from selection of herbs, testing, extraction, binding methods, packaging and labelling. Australian GMP standards are among the most stringent in the world and overseas manufacturers of therapeutic goods supplied to Australia must provide evidence of GMP standards, whilst representatives of the Australian Therapeutic Goods Administration [TGA] inspect any overseas factory that applies for GMP status. The majority of the patent medicines presented in this (Australian published) book are produced by GMP compliant companies and are clearly marked as such. Others are not registered by the TGA, even though they may have been manufactured by a GMP compliant company, and this is often due to their inclusion of animal products such as bovine gallstone, or cicada shell, which are costly to register or defy classification (note that none of the medicines in this book contain parts of endangered species). Some products which are not manufactured by GMP companies are also included because they have passed inspection by the California Department of Health Services as free from contaminants. With the vexed issues of quality, contamination and ethics taken care of (the book is subtitled A Guide to Ethical and Pure Patent Medicines), what of the presentation and clinical usefulness of the book? Will Maclean is well known for his acclaimed Clinical Handbook of Internal Medicine, volume 2 of which is due for publication later this year. Kathryn Taylor practises paediatric medicine and like Maclean, works in Sydney. The same qualities that were evident in the Clinical Manual are present here. As well as the expected TCM and biomedical actions, ingredients and dosages, cautions and contraindications, there is a thorough presentation of the indications and valuable clinical observations on the application of each patent that derives from the clinical experience of the authors. Every patent comes with a photo of the packaging and the majority have graphic cartoons showing the symptomatology treated. Each patent is also accompanied by iconic images which convey basic information such as whether it is TGA registered, GMP compliant, contraindicated in pregnancy, its normal duration of use (e.g. normally prescribed only for a few days, a week, 1-3 weeks, 1-3 months, or longer), whether it contains animal products, whether there is a risk of herb-drug interactions etc., and – signified by a thumbsup – whether it is one of the authors' personal favourites. All-in-all this is the book to get if you ever use patent medicines. Even more, this work may play a part in restoring patent medicines to their rightful place in the clinic. Peter Deadman
Overview
Reviews
Write Your Own Review