Pao Zhi: An Introduction To The Use Of Processed Chinese Medicinals 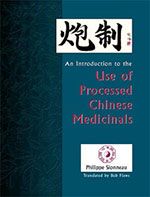 In Chinese herbal medicine, the effectiveness of any medicinal is dependent upon its correct preparation before being used in any formula. The specific quality desired of a medicinal may be maximized by this correct preparation, thus insuring a more successful overall effect for the formula in which it is included. This book describes specific preparation instructions and uses of over 250 herbs for practitioners of Traditional Chinese Medicine. It is an excellent addition to any herbal practitioner’s reference shelf.

Pao zhi is a general term for defining a group of methods of preparing the ingredients of the Chinese materia medica. These processes are guided by the theory of tcm and that of the materia medica or ben cao. They are adapted to the exigencies of clinical practice, to pharmaceutical necessities, and to the nature itself of these remedies. Even if some of these medicinals are used in crude form, the majority are submitted to some special transformation in order to fully profit from their qualities and [specific] advantages. During the preparation of these medicinal substances, all of the operations, such as the length and degree of cooking and the selection of adjuvants, exercise a direct influence on the nature and efficacy of these medicinals. This is based on the traditional saying, 'If it is not cooked enough, it is difficult to obtain the best efficacy, while if it is cooked too long, its efficacy is lost.'

Thus, the terms uncooked (sheng) and prepared (shu) [in tcm pharmacology] are used in a precise way for differentiating the character of medicinals. Sheng does not mean crude or fresh, nor does it mean not prepared as one reads commonly in the Western literature. Sheng is itself a method of preparation, commonly the most elementary one but also sometimes very elaborate. It's characteristic is that it is not made through the intervention of fire or cooking. This mode is opposed to shu which [always] uses heat or cooking.

In addition, these methods of preparation permit the control of toxic ingredients or those having a drastic action, thus assuring the safety of the sick.

In sum, these methods of transformation are an indispensable link between medicinal substances and their clinical use guaranteeing their efficacy and safety of treatment.

1. The Objectives of Preparation
The various methods of preparation permit one to modify or control the nature and functions of the remedies, thus adapting them to the needs of the medical practice and pharmacy. The principal objectives of these transformations are the following:
A. Lessening toxi"city", moderating drastic action, diminishing side effects
Certain medicinal substances which are very effective and very useful may sometimes carry toxi"city" and cause side effects. Therefore they are altered in order to make them safer for the sick. In order to eliminate or reduce the toxi"city" and side effects without affecting the beneficial action of these medicaments, one can use certain methods of transformation.

For instance, Radix Aconiti Kusnezofii (Cao Wu Tou) is cooked in steam or boiled with Radix Glycyrrhizae (Gan Cao) and Semen Sojae Hispidae (Hei Dou). Uncooked Rhizoma Pinelliae Ternatae (Sheng Ban Xia) and uncooked Rhizoma Arisaematis (Sheng Tian Nan Xing) are prepared with uncooked Rhizoma Zingiberis (Sheng Jiang) and Alumen (Ming Fan). The oil from the grains of Semen Crotoni Tiglii (Ba Dou) should be extracted, while Flos Daphnis Genkwae (Yuan Hua) is prepared in vinegar, and Resina Olibani (Ru Xiang) and Resina Myrrhae (Mo Yao) are fried.
B. Modifying the energetic properties (flavor, nature, action)
Almost all of the components of the Chinese materia medica have a particular nature (cold, cool, warm, or hot) and one or more specific flavors (sour, bitter, salty, sweet, or acrid). The processes of preparation can modify the nature and flavor of ingredients and, therefore, their action according to clinical needs. The functions and indications of very numerous remedies depend directly on their mode of transformation.

For instance, Radix Rehmanniae (Di Huang) in its uncooked form (Sheng) possesses a cold nature and cools the blood. However, in its prepared form (Shu), its nature is warm and it nourishes the blood. Uncooked Pollen Typhae (Sheng Pu Huang) quickens the blood and dispels stasis, but carbonized Pollen Typhae (Pu Huang Tan) stops bleeding. Uncooked Rhizoma Zingiberis (Sheng Jiang) is very acrid, slightly warm, and possesses a dispersing, centrifugal function, while roasted Rhizoma Zingiberis (Wei Jiang) which is roasted under cinders, is less acrid and is warm and bitter, and, for this reason, its dispersing function is replaced by a centripetal function (thanks to the bitter flavor). It is also more warming. Radix Polygoni Multiflori (He Shou Wu) in its uncooked form (Sheng) has a neutral nature, its bitter flavor predominates over its sweet flavor, and it clear heat and frees the stools. In its prepared form (Shu), its nature is warm, its sweet flavor predominates over its bitter flavor, and it supplements the liver and kidneys, blood and essence.
C. Reinforcing therapeutic effects
D. Modifying the tropism
E. Dissipating disagreeable odors and flavors
F. Facilitating storage, pharmaceutical production, and assimilation...

Reviews
Write Your Own Review