The Secret Treatise of the Spiritual Orchid 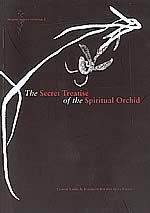 The Secret Treatise starts with an overview of the first seven chapters of the Neijing Suwen, and then continues with a line by line discussion of chapter 8.
Suwen chapter 8 is a text of simplicity, clarity, and deceptive brevity which hides a wealth of powerful images and concepts. It draws an analogy between a Confucian-style court hierarchy in which the heart is emperor, the lung is prime minister and so on, and the human body. Each official or zangfu has own his range of activities, functions and interactions.
An appendix gives the Chinese text and a translation. There is also an index of all main concept and Chinese characters.

Claude Larre: The fundamental question is unique: what is the meaning of zang? The question is more specific in asking what is the meaning of zang when you speak of the twelve zang, and how are the twelve zang expressed in a hierarchy. The profound meaning of the zang is that their charge is to store the essences. They take from food the nourishing part, and they refine it to the point where it is at the same level of constitution as the specific nature of a particular individual and then they store it. In other words it is impossible to store things which are not on the same level as your own personal constitution. The essences are stored because they are refined.

Reviews
Write Your Own Review