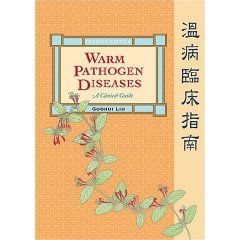 The understanding and treatment of infectious and other externally-contracted diseases has been a central concern of Chinese medicine for millennia. Especially during the past few centuries, the concepts and treatment approaches of the warm pathogen disease school have percolated throughout Chinese medical thought. Modern practitioners apply them in the diagnosis and treatment of a wide variety of serious illnesses, including many which are common in the West, such as auto-immune disorders.

"I warmly recommend this book to anyone interested in warm diseases. For the foreseeable future it will be the definitive English language textbook on the topic, but it is more than that . . . a guide into a field of medicine that no serious practitioner of Chinese medicine should be without."
—Foreword by Volker Scheid, Ph.D.

Warm Pathogen Diseases: A Clinical Guide, by Guohui Liu, is equally well-suited for practitioners, students and teachers. This well-developed task begins with a brief history of the development of warm-disease theory, which allows the reader to understand not only the development of an important school of thought in traditional Chinese medicine, but also its relationship to other schools of thought within the field, most notably the cold damage school. However, what sets this book apart from many others in our field is that Dr. Liu shares his own clinical insights with the reader even as he develops an overall structure within which we can view these ideas. Dr. Liu uses a question and answer format at certain points in the text, which I found very helpful. For example, in the section on tongue diagnosis he discusses two different pathologies that can produce a white thick dry tongue fur. (One possibility is that the warm-heat pathogen has damaged the Stomach fluids and qi. The other possibility is that there is damp-heat in the S pleen.) He asks the question, "How does a practitioner distinguish between these two pathologies that have such similar presentations?" He then goes on to answer this question with specific reference to clinical presentation, which allows the reader to use the information in a concrete way. (If you want the answer to this cliffhanger, you'll have to get the book!)

Furthermore, in his discussion of questions about which there is some disagreement, Dr. Liu quotes modern and classical scholars in order to answer the questions. An example is the discussion of the importance and significance of the promotion of sweating in patients with an exterior pattern. He first explains the point of view associated with Zhao Shao-Qin, a modern professor of medicine. He follows with a quote from Dai Tian-Zhang, an early Qing Dynasty physician, presenting an opposing point of view. Thus, the reader is able to get a window of insight into the process of writing and commentary that has characterised the development of Chinese medicine for the last two thousand years. This vital process continues today in China and has begun to expand abroad through the growing English-language literature of Chinese medicine in the West.

As a practitioner and teacher, I also greatly appreciated the inclusion of case studies in the text. I understand the difficulty of integrating case studies into a work of this nature and I think that Dr. Liu has done an excellent job choosing the cases. One example is a two-year old boy with a high fever who is treated with Sang Ju Yin (Mulberry Leaf and Chrysanthemum Decoction). Dr. Liu describes the case in some detail and provides information about four office visits over a period of time, which gives the reader a better chance of understanding the case. The use of tables summarising information is also of benefit to practitioner and student alike. For example, Table 7.10 provides a concise summary of the differentiation and treatment of wind-warmth disease. Finally, the appendices to the book are quite useful. They include some historical information, supplemental information about less-commonly encountered medicinals and formulas, and additional case studies. All of these additions increase the utility of the text in the clinic and in the classroom.

The only suggestion that I would make with regards to improving the text is in the area of language and vocabulary. Dr. Guo uses primarily the Eastland Press gloss for the terms of Chinese medicine, but some of these terms he has changed because he believes that his term choice, " ' more readily conveys the meaning of the term in Chinese medicine.'' This choice is fine, but it would be helpful if a gloss of these terms was provided in one place within the text. An example is the term, "lurking,'' which we first find early in the text, but which is not explained in detail until the last chapter. As it stands, a reader who, like me, is familiar with Chinese medical Chinese needs to flip through the text to find where a term may have been explained. Remedying this inconvenience would entail only a minor change and it would make the text even better than it already is.