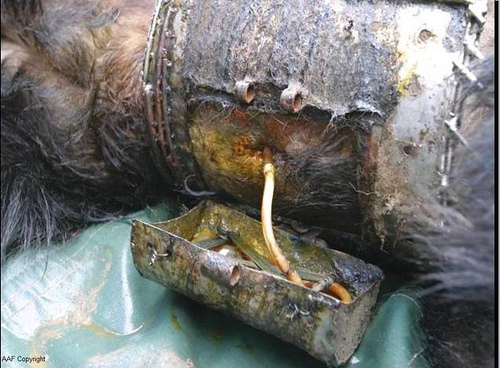 Bears are commonly kept in extraction cages, known as “crush cages”, measuring around 2.6 feet x 4.4 feet x 6.5 feet (79 cm x 130 cm x 200 cm). This prevents the bears, usually weighing between 110 to 260 pounds (50 to 120 kg), being able to stand upright, or in many cases from being able to move at all, in order to facilitate ease of bile extraction. Living up to fifteen years under these kinds of circumstances, the bears invariably suffer severe and prolonged mental and physical distress.

The World Society for the Protection of Animals sent researchers to eleven bile farms in 2009 . They reported seeing diseased bears moaning, banging their heads against their cages and chewing their own paws. Bears suffer from a variety of physical problems on bile farms, including malnutrition, stunted growth and muscle mass loss, and often have their teeth and claws extracted. The various ‘milking’ processes are also believed to be extremely painful, with the bears showing signs of distress when approached by humans, and moaning and chewing their paws while being milked. Indeed, a recent report on Asia One news on 5th August 2011  stated that the bears “often try to kill themselves by hitting their own stomachs as they are unable to bear the pain”.

According to Cai Chengyuan , a researcher with the Chinese Academy of Agricultural Sciences (CAAS), in order to prevent infection and to keep the animals alive for further bile extraction, excessive amounts of antibiotics are usually used, and tests done by the AAF have found traces of antibiotics in farmed bile samples, which are potentially harmful to people consuming the products.

China
Several techniques for extracting bile have been developed, all of them inhumane and painful.

1. Latex catheter
A narrow rubber pipe is embedded under the skin, and surgically attached to the gall bladder. The farmer then extracts the bile through the pipe which exits the skin at the top of the bear's thigh.

These "old-fashioned" latex catheters were largely phased-out in the mid-80s, as the catheter became easily clogged and it was therefore not an effective extraction method. Subsequent modification to this technique saw the introduction of the metal jacket.

2. Metal jacket
A rubber pipe is connected to a fluid bag inside a metal box, which is attached to a metal ‘jacket’ tightly holding the box in place under the bear's abdomen. The bile drained through the rubber pipe is emptied every two weeks by the farmer.

In addition to even greater levels of discomfort and pain, the metal jackets – which weigh over 10 kilos – also cause massive hair loss and painful irritation over the bears' bodies, as they are never removed. Designed to restrain the bears, sharp metal spikes poke into the bears’ necks to stop them bending their heads, and straps and strips of metal restrict their limb movements.

Metal pins, hooks, and any and all makeshift devices are crudely inserted directly into the gall bladder to hold the catheter in place. This is almost always done by unqualified people in conditions ripe for infection.

This method of extraction is also dangerous for the farmer who has to crawl under the cage to drain the bile out of the bag. As a result, this method has largely given way to the metal catheter.

Varying in length from 5 to 7.5 inches, a catheter is surgically implanted into the bears' gall bladder, allowing the farmers to milk the bears daily. During milking, the bears are enticed to lie flat on the bottom of the cage in order to feed from a low tray, thereby allowing the farmer easy access to the bear's abdomen and catheter.

Often, a metal "crush" (a metal grille) is lowered on top of the bears to force them to remain flat until the farmer has finished the procedure. In many cases, the farmers have never bothered to raise the crush bar, and Animals Asia has rescued many bears in cages with crushes rusted permanently into the lowered position, pinning the bears flat to the bottom of the cage for what is, evidently, many years.

4. “Free-dripping" technique
In recent years, Chinese bear farmers have introduced a new, so-called humane, "free-dripping" method of bile extraction. This method uses no catheter, but sees a permanent hole, or fistula, carved into the bear's abdomen and gall bladder, from which bile drips freely out.

During this type of bile extraction, the bears are tempted by food or honey water to lie on the bottom of the cage, while the farmer forces an insanitary tube into the gall bladder; this breaks the membrane that has grown over the hole, and allows bile to flow directly into a bowl beneath.

The damage caused by bile leaking back into the abdomen, together with infection from the permanently open hole is as bad, if not worse, than the older style methods and subsequently there is still a high mortality rate on the farms.

5. "Fake-free dripping" technique
In 2005, Animals Asia discovered a new technique of bile extraction being tested out on the bears - "fake free-dripping". Rather than a fistula, or ‘hole’, in the abdomen, the farmers now insert a permanent, perspex catheter into the fistula, which is almost impossible to see unless the abdomen is shaved and examined close-up. This new technique is against China's current regulations on bear farming.

Due to all the various procedures they are subjected to, the farmed bears’ livers and gallbladders become severely diseased, and the bile collected contaminated with pus, blood, urine and faeces.

Indeed, many people, including veteran doctors of Chinese medicine, believe pharmaceutical companies have exaggerated the medicinal value of bear bile products. The bile extraction procedure causes increased infection within the gall bladder and surrounding organs such as the liver, and bear farmers use a significant amount of antibiotics to treat infection thus caused. Consequently, the bile extracted from the sick bears is usually infected with pus and faeces, and could very likely cause secondary contamination, threatening the health of those ingesting the bile products.

Vietnam
Bears in Vietnam are subjected to a range of procedures. All are caged, but unlike bears on China’s farms which are ‘tapped’ for the bile, in Vietnam bears undergo crude surgery to remove bile from their gall bladders every few months, leaving infected wounds, which often lead to death after three or four such operations.

Today, the bears usually have their gall bladders punctured with long needles, which then "siphon" off the bile via a pump into a bottle. In this method, the bears are sedated - usually with ketamine - restrained with ropes, and have their abdomens jabbed repeatedly with four-inch needles until the gallbladder is located. Continuous puncturing of the gall bladder often leads to bile leakage, and a slow and painful death from peritonitis (inflammation of the peritoneum – the membrane that lines the wall of the abdomen covering the abdominal organs).