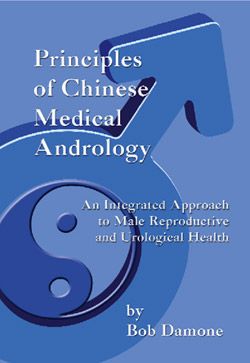 This book is an advanced textbook and a clinical manual of Chinese andrology. Chinese andrology is a speciality within Chinese medicine and is usually practised by modern Chinese doctors who with few exceptions practise integrated Chinese-Western medicine (zhong xi yi jie he). Whereas there is a reasonably-sized body of professional andrology literature in Chinese, this text represents the first comprehensive English language Chinese andrology text to date.

Book 1 introduces the foundations of Chinese andrology and includes all of the following:

“With a depth of scholarly research that often surpasses even the Chinese source texts that inspired it, Bob Damone has created a masterpiece that weaves centuries of accumulated knowledge into one well- organized, clinically focused reference work. The authenticity, accuracy, and utility of this text will make it the defining work in the field of Chinese medical andrology for decades to come.

Whatever its actual gestation as far as Bob Damone is concerned, this book has been a long time coming. The publication of texts on gynaecology and obstetrics has been a regular occurrence for many years now. Yet apart from Anna Lin’s Handbook of TCM Urology and Male Sexual Dysfunction, now out of print, there has not to my knowledge been a single English language book on male disorders.

This is something of a mystery, since these are extremely common disorders. Benign prostatic hyperplasia (BPH), for example, will give rise to distressing symptoms in half of men in their 50s and up to ninety percent in their 80s, while male subfertility can be a factor in half of all couple infertility. It is true, as practitioners often complain, that men do not present for treatment with anything like the readiness of women, yet how many practitioners can say that they have studied male disorders and can speak on the subject with confidence engendering knowledge if they are asked by either their male or female patients? Furthermore, how many practitioners actually ask their male patients the right kind of questions? MDs, for example, are advised to ask all men over the age of 25 about their erectile health, since erectile dysfunction is often the first - and for a while the only - sign of cardiovascular and other major diseases. Why is it, indeed, that in traditional Chinese medicine, we have a special category of questioning for females, but none for males?

The answers to some of these questions may be complex, but the publication of Bob Damone’s Principles of Chinese Medical Andrology can go a long way towards answering the problem of lack of practitioner knowledge. While treatment options are directed mainly at the herbalist, this book comprehensively covers the most common and important male disorders in a way that is valuable to any kind of practitioner.

It starts by laying the foundations, with sections on the history of Chinese andrology, male anatomy (necessarily limited as far as Chinese medicine is concerned), the uniquely Chinese ‘anatomy’ of the channels, the major zangfu relationships, and the causes, traditional categorisation and treatment of male disorders.

The chapter, ‘The Channels and Network Vessels in Andrology’ will be particularly welcomed by acupuncturists. It discusses the relationship of each of the twelve channels and eight extraordinary vessels to male disorders, and homes in on (and explains according to channel theory) why relevant acupuncture points from each channel have the effects that they do.

Ten main male disorders are covered: prostatitis, BPH, prostate cancer, erectile dysfunction, premature ejaculation, priapism, hematospermia, male infertility, Peyronie’s disease and andropause. As we would expect, each covers the Western medicine understanding of the disorder with key diagnostic, differentiation and treatment information. This is followed by the Chinese classification, aetiology, differentiation and treatment. The bulk of the treatment discussed is herbal prescriptions, with a short section on acupuncture-moxibustion. There is advice on lifestyle changes and information on Chinese research and case studies. The latter are particularly useful as they often offer a single main prescription which can be used, with modifications, to treat the disease rather than the pattern. This can be particularly helpful when the differentiation is hard to discern in practice, or when - as may be the case with male subfertility - there may be few symptoms to differentiate.

Probably the last thing an author wants to hear, when the long months and years of hard toil are passing into memory and the finished book sits proudly on their bookshelf, is what they might have added or done differently, but if a second edition is ever contemplated, I do have some suggestions.

A section on how to ask men about their problems could have been helpful. It is recognised in Western medicine andrology, for example, that a blunt question about erectile prowess may not be the best approach. It would also have been good to hear more of the author’s clinical experience (all the case histories are from Chinese publications), his advice on approaching differentiation in the clinic (as opposed to the textbook), on the relative preponderance of different patterns, and on prognosis and treatment duration. This is in part because the reliance on more formal Chinese material can sometimes be a bit limiting, but also because the book most comes alive when he is writing with his own voice.

These are minor quibbles, though, and far more important is the fact that we now have our first real English-language text on male disorders. Hopefully this will mean that more practitioners study and specialise in this subject and that their knowledge and enthusiasm will be better conveyed to the many men who suffer - often in silence - from the disorders so effectively covered in this book.