The Psyche in Chinese Medicine 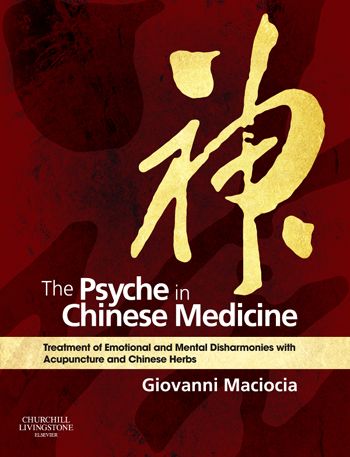 Explores the nature of the Mind (Shen), Ethereal Soul (Hun), Corporeal Soul (Po), Intellect (Yi) and Will-Power (Zhi) and then presents the diagnosis and treatment of the most common psychological disorders with both acupuncture and Chinese herbs in detail. Specific chapters focus on the treatment of common conditions including depression, anxiety, insomnia, panic attacks, bipolar disorder and Attention Deficit Hyperactivity Disorder. Each condition is illustrated with case histories from the author’s 35 years-long practice.

Suitable for practitioners and students of Chinese medicine it covers the aetiology, pathology and diagnosis of mental disorders.

What has that got to do with me? I’m English and don’t think of things in terms of Hun and Zhi and Po.‘ Such were the words of my colleague when the subject of Giovanni Maciocia’s latest book came up in conversation. As the conversation went on, various presumptions were revealed amongst our group: that the Chinese framework for understanding the mind – the five shen – is not particularly relevant to clinical practice, and that Maciocia’s new text probably constituted some kind of abstract guesswork by the author concerning the realms of the mind and spirit.

Such metaphysical speculation is, however, not the stuff of this text. Granted, in this more than any other of Maciocia’s texts we witness an authorial voice at the frontiers of its knowledge, grappling with subjects of great subtlety from the vantage point of 35 years of study, practice and inquiry. More than in any of Maciocia’s texts, a personal authorial voice clearly rings from these pages, a voice that shares, for example, poignant early experiences of being a young practitioner having to learn to deal with patients’ emotional suffering, or describes his ongoing personal inquiry into the respective roles of Chinese medicine and psychotherapy in the treatment of mental‑emotional suffering.

It is tempting in the light of recent research into acupuncture to think of it merely as an elaborate ‑ but effective ‑ method of short‑circuiting the sympathetic nervous system, an intervention where it matters little where the needles are placed so long as the patient’s physiology is benignly influenced by the cascade of changes that accompany the inevitable relaxation response. Practitioners wrestling with the fallout from a growing body of research that shows real acupuncture is no better than sham (though both are effective) seem to be becoming less interested in texts dealing with abstruse Chinese medical theory and principles. Other practitioners dig their heels into the bedrock of tradition, refusing to sully the wisdom of the ancient principles by dallying with reductionist biomedical concepts. In addition to this, it is axiomatic that Westerners come to Chinese medicine laden heavily with judeo‑christian notions of the ‘spirit’. The assumption seems widely held that ‘us Westerners’ tend to be psychologically focused, experiencing psychoemotional suffering in our minds (‘I’m depressed’) whereas ‘the Chinese’ tend to somatise their suffering (‘my chest hurts’). Such generalisations, perhaps grounded in some level of truth, likely inform many practitioners’ view of Western and Chinese models of the psyche. It is into this climate that Maciocia publishes his latest offering.

The attempt to fully comprehend what specific terms actually mean in Chinese medicine is a significant undertaking. Even if one is fluent in the language and erudite in Chinese culture, it would take a significant and diligent inquiry to fully comprehend, for example, what is meant by ‘shen’ (see Qu and Garvey’s discussion of Yuanshen and Shishen in JCM 91). Such understanding requires rigour, honesty and sensitivity. During my own personal studies of Chinese medicine, I am frequently made aware that in the first flush of passion for a subject I often eagerly grab for the first meaning of any substance that flits across my consciousness. In many cases these meanings crystallise in the mind to become truth, later perhaps to be passionately defended and – perish the thought ‑ even taught to others. None of this, of course, makes them correct. Given the growing body of Western research that confirms what Chinese medicine has long held ‑ that the mind and emotions are a primary cause of disease – it is perhaps prudent for practitioners to take an interest in what Chinese medicine actually has to say on the subject rather than settling for a Western gloss on its theories.

The title of this book ‑ Psyche ‑ seems an unusual choice – it does not have the immediate pragmatic clinical allure of Flaws’ Chinese Medical Psychiatry or Schnyer and Allen’s Acupuncture in the Treatment of Depression. Indeed, in terms of biomedical diseases the text confines itself to explaining the Chinese medical treatment of the most common psychiatric diseases ‑ depression, anxiety, bipolar disorder, ADD and ADHD. This text, however, is not so much just a ‘how to treat mental‑emotional problems’ clinical manual – although where it does this it is effective; it goes much further than this, constituting a comprehensive investigation into the entire structure of the psyche as understood by Chinese medicine. In the process it rightfully shakes the foundations of our Western notions of Chinese medicine. Central to the author’s argument is the thesis that the nature of the self in China is fundamentally based on Confucianism, and as such is radically different to that of the West: ‘the entire notion … of an inner psychic life, in all its ramifications so familiar to us, simply is not present … not even as a rejected possibility.’ [Preface, p. xv]

Maciocia does not merely attempt a straight transmission of the influences that shape the Chinese view of the self; he throws the Confucian roots of the Chinese map of the self into stark relief by exploring them against a backdrop of Western psychotherapeutic theory and modern neurophysiology. Such inquiry seems entirely appropriate for Western practitioners, who more than ever take on the role of counsellor as well as acupuncturist, and are frequently also required to understand the biomedical correlates of psychiatric illness. This book builds on material previously published in The Practice of Chinese Medicine, providing a deeper and more comprehensive understanding of the necessary concepts and clinical strategies; thus it fills substantial gaps in the current Western knowledge base of Chinese medicine. Also of interest is the method Maciocia has developed of working with the five shen, in which he relinquishes a strict pattern‑based clinical strategy to focus on ‘nourishing’ the five shen ‑ the result of which, he affirms, can be deep mental‑emotional transformation.

The relevant Chinese medical theory is comprehensively covered and includes the five shen, the emotions (including pervasive ‘Western’ emotions such as guilt and shame) and the aetiology, diagnosis and TCM differentiation of emotional problems. As usual with Churchill Livingstone publications the theory is extensively supported with useful illustrations, although at times the creativity of the illustrator is given a little too much free reign (the lava lamp works but the cigarette pushes the bounds of metaphor). The sections on the treatment of depression and anxiety are particularly useful and are replete with case histories, relevant research and a comprehensive discussion of both Chinese and Western theory and treatment (although the summaries of research sometimes – frustratingly ‑ omit the precise clinical methods and points used). Given the frequency with which patients experiencing these conditions present in clinics of Chinese medicine today, these sections alone would be worth the price of entry for most practitioners.

This is an excellent text that goes far beyond the role of clinical instruction manual. It combines Maciocia’s encyclopaedic knowledge and extensive experience with a freshness of inquiry and beguiling humility that is both aware of its own limits and those of Chinese medicine. Maciocia seems to have come to a new level of understanding in his inquiry into the relationship of Chinese medicine and emotional suffering ‑ he concludes by rejecting the Chinese and Western medical notion that emotions are merely a 'cause of disease’, emphasising instead that emotions are actually what define human nature and give meaning to our lives. Whilst Maciocia is respectful to the Chinese tradition and committed to understanding it on its own cultural and linguistic terms, he is also clear about the need for us to integrate it with our own Western traditions ‑ both ancient and modern ‑ that have their own value in healing the psyche. For anyone who is engaged in the treatment of psychiatric or mental‑emotional conditions, or who wishes to deepen their understanding of this aspect of Chinese medicine, this book is highly recommended.

Chapter 1. The psyche in Chinese medicine

Chapter 2. The nature of the Mind (Shen) in Chinese medicine

Chapter 8. The12 Internal Organs and the Psyche

Chapter 12. Patterns in mental-emotional problems and their treatment with herbal medicine and acupuncture

Chapter 13. Acupuncture in the treatment of mental-emotional problems

Chapter 14. Emotions and concept of self in Western philosophy

Chapter 15. The influence of Confucianism on the Chinese view of the Mind and Spirit

Chapter 22. Epilogue: the role of Chinese medicine in disorders of the psyche

Appendix 3. The Classics of Chinese medicine