The Treatment Of Disease In TCM Vol. 3: Diseases of the Mouth, Lips, Tongue, Teeth and Gums 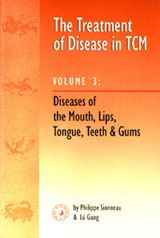 This is the third volume in the sever-volume series titled The Treatment of Disease in TCM authored by Philippe Sionneau and Lu Gang. In this volume, the authors discuss the TCM disease cuases and mechanisms, pattern discrimination, treatment principles, formulas and atheir modifications, and acupuncture and moxibustion for a wide variety of Diseases of the mouth, lips, tongue, teeth, and gums. This volume is the first TCM textbook on Stomatology to be published in English. Practitioners will find this book an invaluable resource for dealing with patients with everything from oral aphthae to bleeding and/or receding gums. Not only is this book unique because of the number of diseases it discusses but also becuase of the inclusiveness of the patterns listed under each disease category. In addition, the modifications of the guiding formulas and acupuncture protocols exemplify and insure individualized treatment plans for individual patients.

The English language library of texts on Chinese medicine steadily grows, and one major part of this library is made up of clinical manuals on the differentiation and treatment of disease. Inevitably, however, the majority of these manuals deal with similar major diseases. This Blue Poppy series, of which this is the third volume, is marked by its attention to disturbing symptoms which may not have a place in other texts. As Philippe Sionneau points out, being familiar with the presentation of these disorders may make a significant difference to our treatments. For example if we know that in addition to bi yuan (nasal congestion), traditional classifications of nasal disorders include bi gan (dry nose), bi tong (nose pain), bi yang (itchy nose), bi chou (foul nasal odour) or bi suan (acid or sour nose) we can understand how a patient may not fit into the traditional differentiation of bi yuan but rather into one of these other categories. This volume covers disorders of the mouth (various unusual tastes, drooling, sores etc.), lips (crimson, cyanotic, pale, cracked, trembling etc.), tongue (swelling, trembling, stiff, numb, limp, painful etc.) and teeth and gums (loose, pain etc.). One symptom, bruxism (grinding of the teeth) that is discussed here is commonly encountered in clinical practice but rarely in English books of TCM. It is differentiated into i. exuberant fire of the Heart and Stomach, ii. accumulation and stagnation of food and drink, iii. roundworms harassing internally, iv. qi and blood vacuity, v. Liver wind stirring internally. For each pattern the clinical manifestations, treatment principle, acupuncture treatment and herbal prescription are given. Finally, and valuably, there is a clinical note which fills out the bare skeleton of such basic differentiation:

Bruxism is a common symptom among Western female patients who may either say they have tempero-mandibular joint disorder or that they grind their teeth at night. They may also say that their dentist has fitted them with a mouth splint to wear at night during sleep. Commonly, such women also suffer from neck and shoulder tension and restless sleep or insomnia, possibly with profuse dreams. Typically, such women in their late 30s and throughout their 40s present a more complex pattern than the simple patterns described above. Frequently, they display a combination of Spleen vacuity leading to qi and blood vacuity, liver depression with depressive heat, and an element of underlying Kidney vacuity. Usually they do not manifest full-blown signs and symptoms of Liver wind.